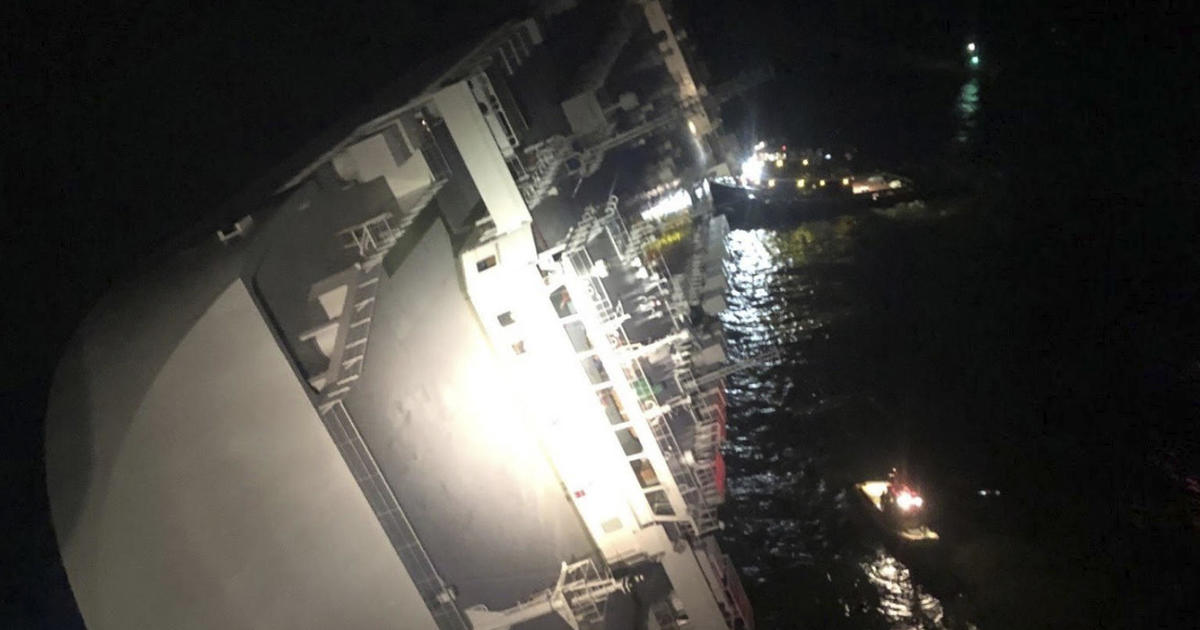 Sailors shouted above blaring alarms and other loud noises in the final minutes before the cargo ship Golden Ray overturned a year ago along the coast of Georgia, according to an audio recording played Monday during a government hearing on the shipwreck. The recording from the ship’s black box was among the first pieces of evidence U.S. Coast Guard investigators presented on the opening day of public hearings expected to last more than a week.

In this photo provided by the U.S. Coast Guard, the Golden Ray cargo ship lists to one side near a port on the Georgia coast, early Sunday, Sept. 8, 2019.

The South Korean-owned Golden Ray capsized with more than 4,200 automobiles in its cargo decks shortly after departing the Port of Brunswick on Sept. 8, 2019. The ship, with its cargo still inside, remains stuck at the edge of the shipping channel off St. Simons Island, about 70 miles south of Savannah.

The audio played Monday accompanied an animation that followed the ship’s course based on data from the black box recorder. It appeared to show the Golden Ray entering a turn to its starboard side when the chaos broke out.

“What’s going on captain?” a man can be heard asking as a series of loud noises erupt followed by alarms. Sailors can be heard shouting above the cacophony, though it’s difficult to understand what they’re saying.

Capt. Blake Welborn, the Coast Guard officer presiding over the hearings, said Monday that investigators found no evidence of failures in the vessel’s safety equipment, communications equipment or machinery that contributed to the wreck.

Built in 2017, the Golden Ray had last been inspected by the Coast Guard in May 2019 – roughly four months before the ship capsized.

The Golden Ray overturned in the sound between St. Simons and Jekyll Islands. Because it’s both deep and wide, local harbor pilots who steer ships into port and back to sea prefer that stretch for passing oncoming vessels, said Bruce Fendig, a senior member of the Brunswick Bar Pilots Association.

Hurricane Dorian brushed the Georgia coast just a few days before the Golden Ray capsized, but harbor pilots found no damage or disruption to the waterway or its navigational buoys, Fendig testified. He said 12 other ships had safely navigated the channel between the storm’s passing and the Golden Ray’s departure.

“The storm really wasn’t that significant for us,” said Fendig, who was not the pilot aboard the Golden Ray.

The Coast Guard has blocked out more than a week to hear testimony in the port city of Brunswick. As a precaution against coronavirus infections, the public is not allowed to attend in person. Instead, the hearings are being streamed live online.

Planned witnesses include the Golden Ray’s captain, the Georgia-based harbor pilot in charge of steering the ship when it capsized, and an executive of Hyundai Glovis, the shipping company that owns the vessel.

It could take another year before investigators publish a report of their findings, with recommendations aimed at improving safety.

Separate from the investigation, a multiagency command has spent the past year making plans to carve the ship into eight giant chunks to be hauled away by barges. Officials hope to begin the first cut sometime in October.

In this Sept. 9, 2019, file photo, rescuers work near the stern of the vessel Golden Ray as it lays on its side near the Moran tug boat Dorothy Moran in Jekyll Island, Ga.

« Man in wheelchair visits all 7 continents