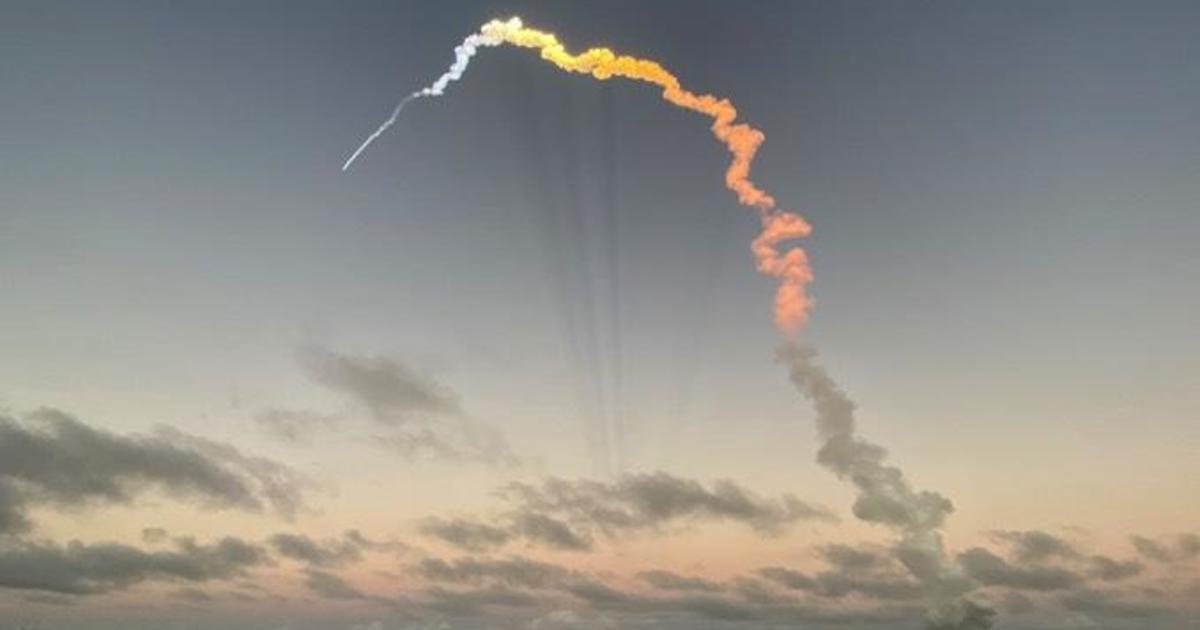 A United Launch Alliance Atlas 5 rocket thundered to life and streaked away from Cape Canaveral in a dramatic sunset launch, putting on a spectacular Friday the 13th sky show visible across Florida’s Space Coast.

Running nine days late because of trouble with ground equipment, the rocket’s Russian-built RD-180 main engine fired up with a rush of flame at 5:32 p.m EST., followed by ignition of three strap-on solid-fuel boosters, instantly pushing the 20-story-tall rocket away from pad 41 at the Cape Canaveral Air Force Station.

Just two miles away, a SpaceX Falcon 9 rocket stood poised for launch Sunday from the Kennedy Space Center to put four astronauts into orbit for a flight to the International Space Station, the first commercial mission ever certified by NASA and the FAA.

The astronauts’ launch had been planned for Saturday, but the flight was delayed due to expected high winds at the launch site and offshore weather where SpaceX plans to land the rocket’s first stage on a company droneship.

In any case, with a crowd of reporters on hand to watch the Atlas launch, the rocket smoothly accelerated as it consumed propellants and lost weight, powering through the speed of sound and the region of maximum aerodynamic stress as it climbed out of the thick lower atmosphere and arced away to the northeast.

The three strap-on boosters burned out and fell away as planned about two minutes into flight and the ascent continued on the power of the RD-180 engine.

The 66-foot-long GEM 63 solid rocket motors, built by Northrop Grumman, were making their first flight, replacing the AJ-60A SRMs built by Aerojet Rocketdyne that flew with all previous booster-equipped Atlas 5s. ULA says the new boosters are more economical and are easier to handle during ground processing.

The boosters appeared to work normally Friday and a little more than a minute after they were jettisoned, the two halves of the Atlas 5’s clamshell-like payload fairing peeled away, exposing the satellite to the space environment.

At that point, as usual with classified NRO missions, United Launch Alliance ended its mission commentary, leaving it to the Air Force to confirm a successful flight in a post-launch update some time after the satellite’s deployment.

No details about the rocket’s classified payload or its intended orbit were released, but charts posted by ULA before launch showed a northeasterly trajectory paralleling the U.S. East Coast, indicating an orbit tilted, or inclined, 50 to 60 degrees or more to the equator.

Ted Molczan, a respected independent satellite analyst, speculated the payload was either a Satellite Data System spacecraft, used to pick up and pass on signals from spy satellites in lower orbits, or a signals intelligence satellite used to eavesdrop on targeted communications.

Both types of satellites have used steeply inclined, highly elliptical “Molniya” orbits in the past to monitor Russia and other areas of interest in the northern hemisphere. But no details about the final orbit of the satellite launched Wednesday were immediately available.