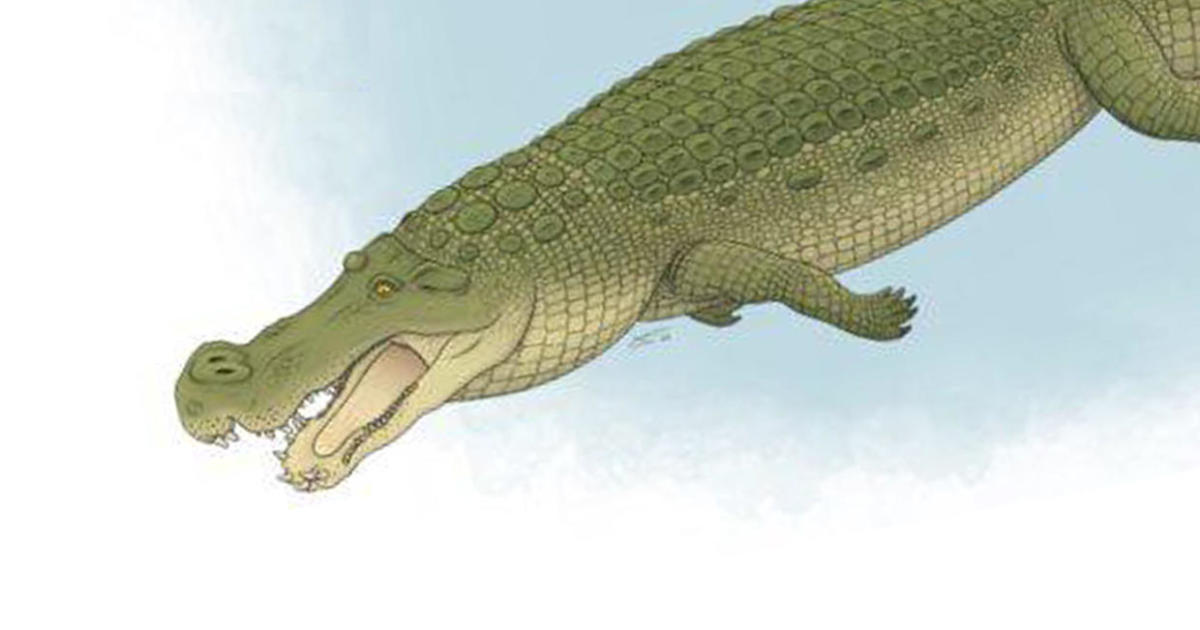 Crocodiles may seem intimidating in the year 2020, but millions of years ago, they were so large, they were capable of eating dinosaurs. These massive North American crocodiles, scientists said, had teeth the “size of bananas.”

According to a new study of Deinosuchus fossils published in the Journal of Vertebrate Paleontology, the creatures lived between 75 million and 82 million years ago. Deinosuchus, which means “terror crocodile,” used their ginormous teeth to eat even the largest of dinosaurs — putting them at the top of the food chain in their ecosystem.

Researchers studied fossils and bite marks on turtle shells and dinosaur bones to create a full picture of Deinosuchus. They said the animal, which grew up to 33 feet in length, was actually more closely related to alligators than crocodiles.

Researchers said nearly everything in their habitat was up for grabs to be eaten by the massive predators.

An illustration of Deinosuchus from the journal’s cover.

“Deinosuchus was a giant that must have terrorized dinosaurs that came to the water’s edge to drink,” lead author Adam Cossette, a paleontologist at the New York Institute of Technology, said in a press release Monday. “Until now, the complete animal was unknown. These new specimens we’ve examined reveal a bizarre, monstrous predator with teeth the size of bananas.”

Cossette and co-researcher Christoper Brochu, a paleontologist at the University of Iowa, identified three known species of Deinosuchus: Deinosuchus hatcheri, Deinosuchus riograndensis and Deinosuchus schwimmeri. All three roamed various parts of the U.S., which at the time was cut in half by a shallow sea.

Many aspects of the ancient beasts remain mysterious. They didn’t look like a crocodile or an alligator, and their extremely large noses had huge holes at the tips that are completely unique and without a known purpose.

The animals were wiped out before the mass extinction of the dinosaurs, but the reason for their disappearance remains unknown.

“It was a strange animal,” said Brochu. “It shows that crocodylians are not ‘living fossils’ that haven’t changed since the age of dinosaurs. They’ve evolved just as dynamically as any other group.”