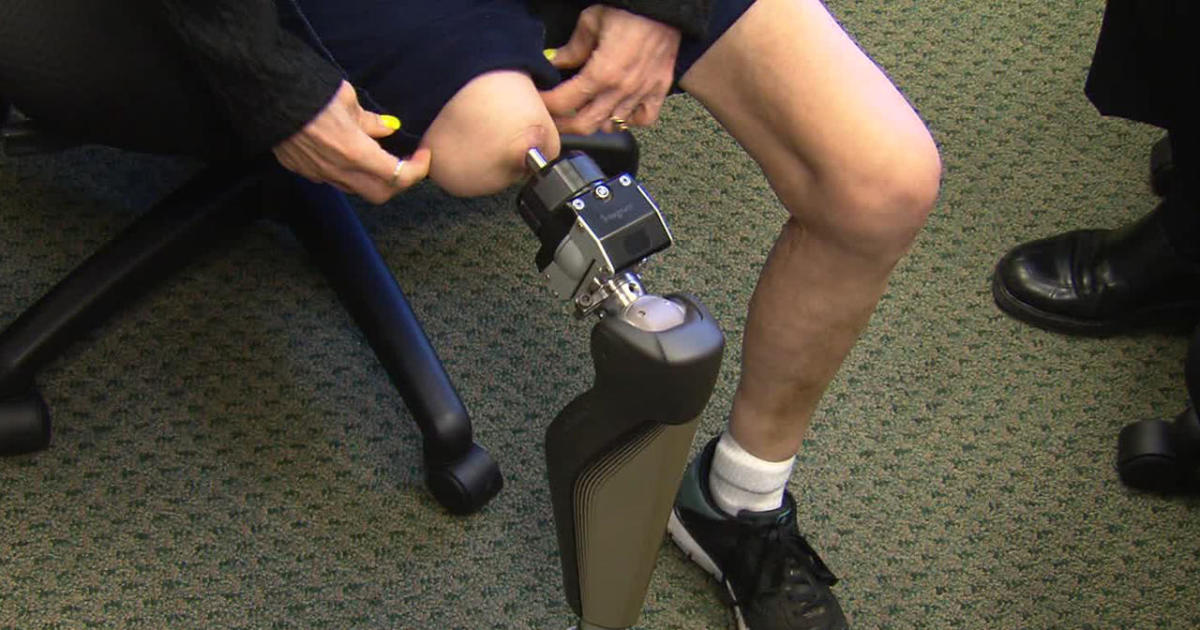 A giant step forward for users of artificial legs

Every time Donna Thornburg attached her artificial leg, it was an equal measure of necessity and pain. After a car accident led to her leg amputation in 2017, she spent weekends only doing things like playing bingo. But even that hurt, because prolonged sitting twisted the leg …

“You have pain from the socket’s bigger circumference than my other leg,” she said. “So, you’re always sitting sideways, which causes pain in your back and your hips.”

… to the point where walking out of the bingo parlor was a bittersweet reminder of the life she once had.

As she told correspondent Barry Petersen, she used to hike, run, horseback ride, bowl and ski.

“Have you been able to do this with the prosthesis?” Petersen asked.

Her walk was assessed by a surgeon, Dr. Jason Stoneback, at the UCHealth University of Colorado Hospital on the Anschutz Medical Campus in Aurora. He showed Petersen a computer analysis of Thornburg’s walk: “You can see her upper torso is sort of shifting over the right side, so that she can maintain her balance through her gait.”

Dr. Stoneback decided she qualified for a new kind of surgery he performs, called osseointegration. Osseo comes from Latin for bone, and integrare, to make whole.

The idea: insert a titanium rod into the bone. Over the course of several weeks, the bone will grow around the rod, and integrate it. One part of the rod sticks out of the leg, where a special prosthesis can be literally snapped on or off.

Osseointegration, a form of implant surgery, is restoring freedom of movement to amputees in a revolutionary new way.

Petersen asked her, “What has this meant for your life?”

“I can get out and enjoy my life,” Davis said. “I can take care of my grandkids. I have 19 grandkids. I go out, and I can garden with them. I can do pretty much everything that I couldn’t do before with them, where I would just be sitting in the house.”

With a gyroscope and a computer chip, the leg works with her. “If I’d stepped on something that threw me off balance … it would tighten up. So, it’d just make it firm so that I wouldn’t fall down,” she said.

And it may get a lot better. If nerves in the stump could be linked to the artificial limb, then the brain could control the limb, just as it does a normal arm or leg.

We’ve already seen it work in the movies, in “The Empire Strikes Back,” when Luke Skywalker receives a robot hand with which he can move his fingers and touch. “That’s what you’re trying to do, isn’t it?” asked Petersen. “Can you? I mean, George Lucas dreamed it up. Now, it’s just up to you to make it work?”

“We don’t know, but I’m normally pretty confident,” Dr. Brånemark said. “So, I think we can do it.”

“I’m blown away right now,” she said. “I’m kind of speechless. It’s beyond what I ever even hoped for, thought, or imagined. I don’t even know what to say. It’s crazy different. It feels like a part of me.”

Donna Thornburg takes her first steps with her new leg.

For the first moment since she lost her leg, something to celebrate.”I wish I had the words, but I don’t have words,” she said.

Petersen caught up with her four months after the surgery, after the leg had become her new normal. He asked, “Are you getting close to the point where you just don’t think about it anymore?”

“I hope so! The main thing for me is moving my arms. I forget to do that, and then I’ll start walking like this!” she laughed, arms rigid.

Not just walking, but Thornburg and her granddaughter went a step or two better, breaking into dance.

Donna Thornburg dances with her granddaughter.

« A giant step forward for users of artificial legs