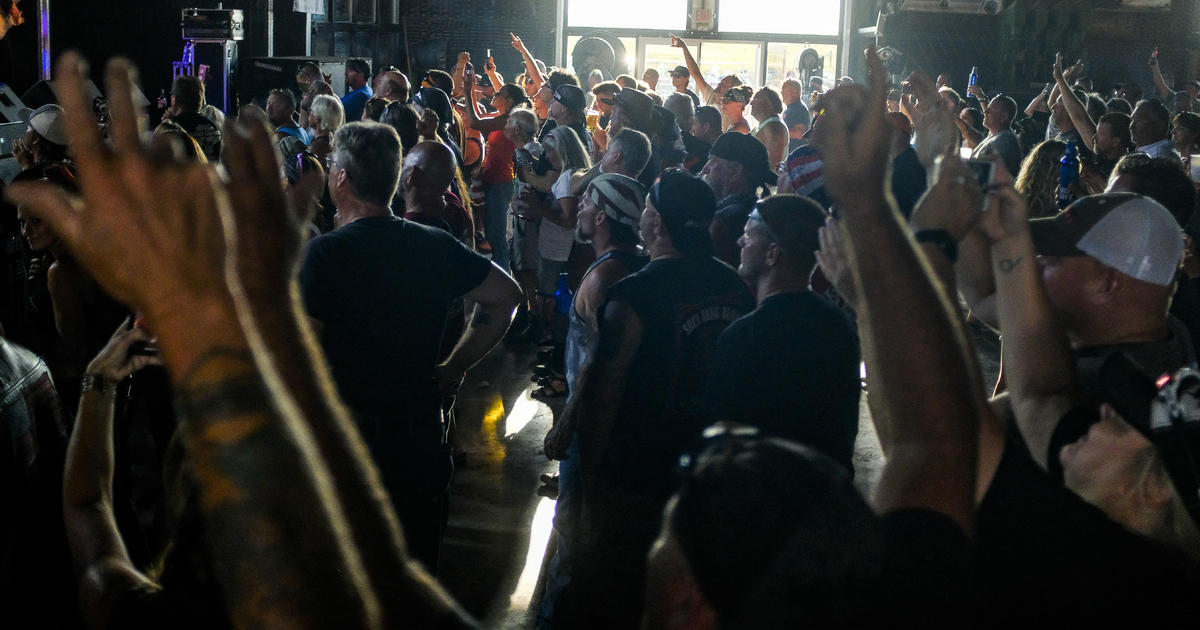 South Dakota authorities on Sunday reported the first haul of crashes, arrests and citations from the Sturgis Motorcycle Rally in the western part of the state. The annual rally started on Friday, drawing thousands of maskless riders to the streets and bars of Sturgis.

While organizers have said they expect fewer visitors than in other years, the Argus Leader reports the number of arrests and citations have increased from last year.

People cheer during a concert at the Full Throttle Saloon during the 80th Annual Sturgis Motorcycle Rally on August 7, 2020 in Sturgis, South Dakota.

The Department of Public Safety reported that police made 84 arrests for driving under the influence or drug-related offenses during a 24-hour period spanning from Saturday into Sunday morning. That’s up from last year, when 76 people had been arrested in a similar time frame.

Police have also issued more citations, with 226 people getting tickets. The figure is 37 more than last year. But it appears police are less lenient this year and are letting fewer people off with warnings.

So far, police in the region have reported 18 crashes, which is down from last year’s mark of 20. None have been fatal.

Shrugging off the five million coronavirus cases now tallied in the U.S., thousands of motorcyclists converged this weekend in Sturgis for what is billed as the biggest cycle gathering in the world.

“I’ve been here since the beginning of July,” one person in Sturgis told CBS News. “People are tired of being at home, you know. This is what this rally started about is freedom.”

In June, city officials decided in an eight to one vote to go ahead with the rally, CBS affiliate KELO reports. In an email to CBS News, the City of Sturgis Public Information Officer Christina Steele said the “decision to hold the Rally came after hearing from thousands of attendees that they were coming to the event, even if it was canceled by the City of Sturgis.”

In past years, the 10-day rally in the town of Sturgis has drawn hundreds of thousands of bikers to socialize, drink and party together — raising fears among some locals that this year’s version could be a superspreader event.

For now, the north-central state is far from the hardest-hit by the COVID-19 pandemic — Meade County, where Sturgis is located, has registered only one virus death, according to state health officials. But in the last two weeks, South Dakota has recorded an increase in the percent of virus tests coming back positive — and former FDA Commissioner Scott Gottlieb told “Face The Nation” that a second wave may be harder to control.

“This has become so pervasive across the country that it could start to infect more rural communities that have largely been untouched to date,” he said.

Some of the bikers pouring into the area are coming from distant states far more afflicted.

South Dakota, site of the famed massive sculpture of four former presidents on Mount Rushmore — where President Donald Trump held a rally last month — is one of the few to have never ordered a lockdown or insisted on mask-wearing.

Attendees in Sturgis are being encouraged, but not required, to wear masks. Few appeared to be doing so.

So far, as the town’s Main Street fills with bikes and bars fill with bikers, there is scant evidence of social distancing. Visitors to this 80th edition of the cycle rally already greatly outnumber the 6,000 residents of Sturgis, wedged into the South Dakota hills.

The rally has long been a huge economic boon to Sturgis, and vendors were taking full advantage of it on Sunday.

They peddled T-shirts marked “I survived corona” or “God, guns and Trump” or bearing a photomontage of the president wearing a leather jacket and making an obscene gesture.

While some locals worried about the two-wheeled invaders, the state’s governor warmly embraced them.

“We’re excited for visitors to see what our great state has to offer!” tweeted Kristi Noem, a Republican and strong Trump supporter.

Our state had the Mount Rushmore Fireworks Celebration. We had the first national indoor sporting event with fans thanks to @PBR.

We've been "Back to Normal" for over 3 months, and South Dakota is in a good spot.

Caitlin O’Kane contributed to this report.