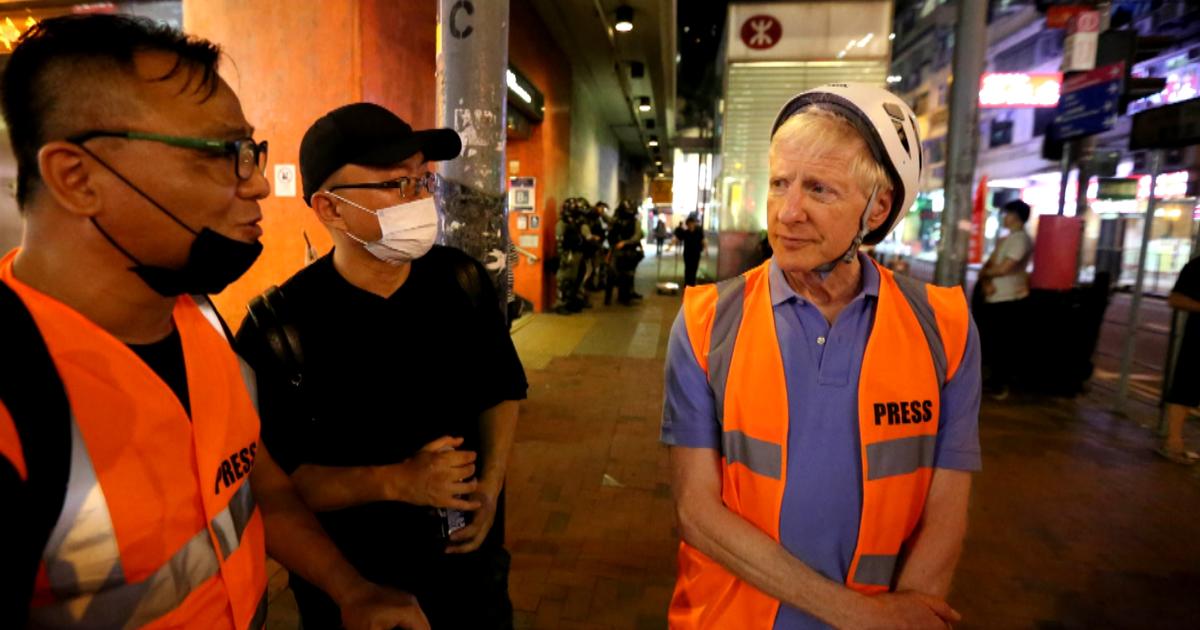 Regular 60 Minutes viewers will likely recognize the name Robert G. Anderson. It has appeared before some of the broadcast’s most indelible stories: deep investigations, interviews with world leaders, and human-interest stories that pique curiosity and tug at the heart.

It is a name that has appeared at the beginning of more than 180 stories on 60 Minutes — more than any other producer’s in the broadcast’s history. But this Sunday, the name Robert G. Anderson will appear for the final time. Our colleague, Bob, has retired.

Anderson began his career as a reporter in Cedar Rapids before producing local news in Louisville and Philadelphia. He joined CBS News in 1979 as a producer in the Chicago bureau and went on to become the network’s Tokyo bureau chief.

Following his stint in Asia, Anderson returned to the CBS News Washington bureau, where he covered the 1984 Democratic and Republican National Conventions. He moved to New York to produce for the CBS Evening News and later worked as the network’s foreign editor during such stores as the Tiananmen Square massacre and the fall of the Berlin Wall.

In 1990, he joined 60 Minutes, where he worked with several of the broadcast’s most familiar correspondents. His longest partnership was with Mike Wallace, with whom he collaborated for more than 20 years. After Wallace retired, Anderson began producing for Pelley at the broadcast.

“There are 60 Minutes stories that you never get out of your head,” Pelley said. “They were 10, 20, 30 years ago, certain scenes, moments, phrases that were used that had stuck in your mind. And Bob Anderson’s legacy is that so many of those moments were the result of his genius, of his reporting, his journalism, his television production expertise.”

Here are some of the memorable stories Anderson produced for 60 Minutes.

SEX ABUSE IN THE CATHOLIC CHURCH

Before news of child sexual abuse within the Catholic Church ever broke open on a national level, Bob Anderson produced a piece that reported on it.

In 1993, Anderson and Mike Wallace reported on New Mexico Archbishop Robert Sanchez, who was accused of having sex with young women and covering up similar sexual misconduct by priests in his Archdiocese.

During a 10-mile annual pilgrimage of parishioners in New Mexico, Wallace famously chased down Father Kirsch to ask about the allegations. According to Anderson, it was one of last times Wallace conducted an ambush-style interview.

AN INTERVIEW WITH “DR. DEATH”

1998: An interview with Dr. Jack Kevorkian

In 1998, Anderson produced one of 60 Minutes’ most controversial reports: “Death by Doctor,” an interview with Dr. Jack Kevorkian. The pathologist had previously acknowledged helping more than 130 patients kill themselves, but on the broadcast, Kevorkian admitted to Wallace that he had killed a terminally ill patient himself.

The report included a video showing Kevorkian administering lethal injections to Tom Youk, a terminally ill man who was suffering from Lou Gehrig’s disease. By showing the act on 60 Minutes, Kevorkian said he wanted to make himself a test case to move the public debate from doctor-assisted suicide to euthanasia, death triggered directly by a doctor.

The report spurred controversy and a weeks-long national debate on the issue. As a result of the report, Kevorkian was charged and later found guilty of second-degree homicide.

Among those offended in the wake of the controversial interview with Kevorkian were people with Lou Gehrig’s disease, who felt it implied that people with the disease had little choice but to kill themselves. After the report aired, protestors demonstrated outside of the CBS News Broadcast Center in New York City.

In response to the backlash, Anderson and Wallace reported a follow-up piece they called “Choosing Life,” a revealing and uplifting story about people in various stages of Lou Gehrig’s disease, who, despite their debilitating disease, had chosen to keep living.

2000: An interview with China’s Jiang Zemin

During their partnership, Wallace and Anderson conducted several prominent interviews with heads of state, including Boris Yeltsin, Yasir Arafat, and Vladimir Putin. But it was a 2000 interview with then-Chinese President Jiang Zemin that made waves for its rarity. According to the Wall Street Journal, it was one of the longest interviews ever between an American journalist and a Chinese head of state.

In the two-part interview, which aired two days before Jiang visited the United States, Wallace asked Zemin about Falun Gong, the Tiananmen Square massacre, and the overall relationship between China and the U.S.

Zemin had agreed to speak candidly with 60 Minutes, emphasizing that he wanted better relations with America. “I hope to convey through your program my best wishes to the American people,” he told Wallace.

Ahead of his trip to New York City to speak at the UN General Assembly, Anderson and Scott Pelley traveled to Iran to interview Ahmadinejad at his presidential compound. But when the 60 Minutes team landed in Tehran, they spent days waiting, and Pelley was not sure Ahmadinejad would follow through with the interview.

“I would say, ‘Bob, this isn’t happening. We should go back to New York,'” Pelley recalled. “‘Bob would say, ‘Patience, patience. All in the fullness of time.’ And sure enough, after about 72 hours of just sitting in a hotel room, waiting for the call, the call came”

In the interview, Pelley asked Ahmadinejad about his denied request to visit the World Trade Center site, the growing evidence that Iranian weapons were being sent to Iraq, and claims by the Bush administration that Iran was pursuing a nuclear bomb. Pelley said Anderson encouraged him to ask tough, relentless questions of Ahmadinejad in the 60 Minutes tradition. But it was clear Iran’s leader was not prepared.

“You are like a CIA investigator,” Ahmadinejad said through an interpreter. “This is not Guantanamo Bay. This is not a Baghdad prison. This is not a secret prison in Europe. This is not Abu Ghraib. This is Iran. I’m the president of this country!”

In all of his three decades at 60 Minutes, Bob Anderson was a hands-on producer.

“He is a journalist,” correspondent Scott Pelley said. “He burned up shoe leather talking to people, digging up the facts, traveling anywhere he had to go in the world to get a story nailed down.”

One of the best examples of Anderson’s relentless work was a report he and Pelley did about fentanyl, a synthetic opioid 50 times more potent than heroin, that was being sold online from China.

Anderson worked with the U.S. Attorney’s Office in Ohio, to talk with people who had lost their loved ones to fentanyl. But that was not enough for Anderson — he wanted to go to China to confront the people who were behind the mail-order fentanyl operation, a father-and-son team who went by the alias “Gordon Jin.”

Once in Shanghai, Anderson hired a private investigator to track down the duo. Once the investigator was able to find the father, Anderson tracked him to a grocery store that he frequented, then surprised him as he left, filming the entire encounter.

“This would be an ambush interview,” Anderson told 60 Minutes Overtime at the time. “And I think the definition is, you pop out of nowhere and start asking somebody questions, somebody who wasn’t expecting to see you. What we’ve learned over the years is that it’s not to be used lightly, and it’s a last resort. And it can be wonderfully illuminating.”

One aspect of Anderson’s producing that made him so integral to 60 Minutes was his seemingly limitless range. Sometimes he covered space, producing pieces on the Hubble Space Telescope and NASA’s “Curiosity” rover. Other times, he was covering politics, producing an interview with then-Republican presidential candidate Donald Trump or former Speaker of the House Paul Ryan. One day he would be in Hong Kong covering protests, and on another day, he was outside London, in the home of a musical prodigy.

That prodigy was Alma Deutscher, a young girl who was playing piano and violin by the time she was three years old and wrote her first opera when she was 10. Pelley’s profile of Alma, which Anderson produced, has been an audience favorite each time it re-airs.

“That was Bob’s genius,” Pelley said. “He could take on any kind of story — interview presidents, investigate drug dealers in China, and then do a lovely, lyric feature story that was just as charming as it could possibly be.”

The video at the top of the page was produced by Will Croxton and Brit McCandless Farmer. Rebecca Chertok Gonsalves was the associate producer and Will Croxton was the editor.

Anderson produced for Mike Wallace for more than 20 years at 60 Minutes.