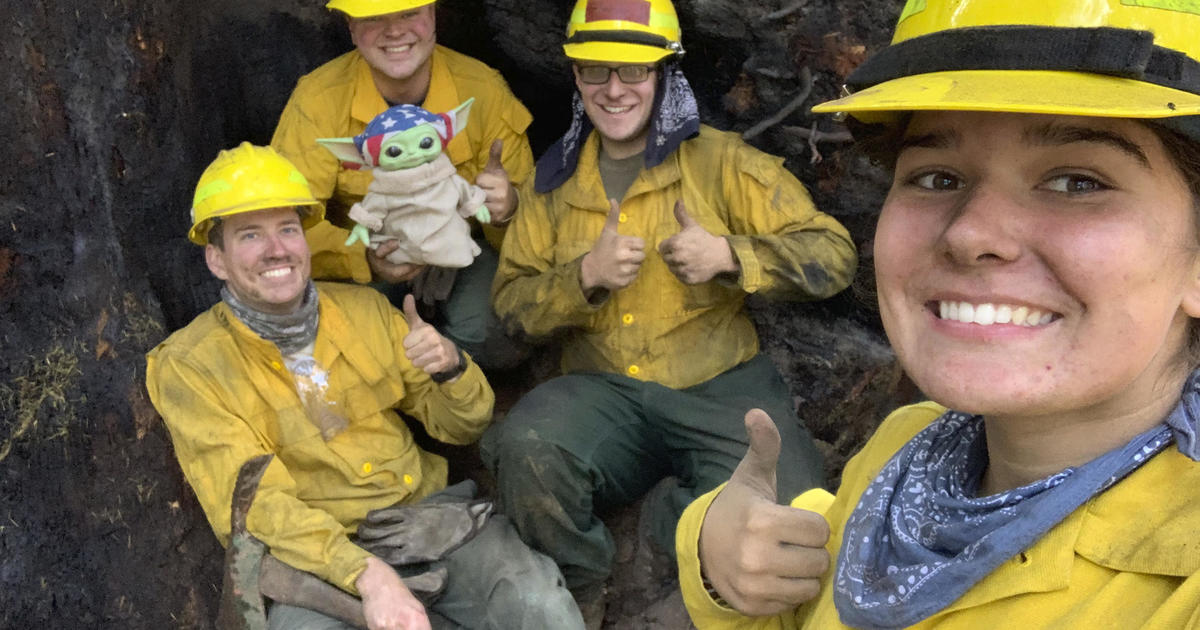 Baby Yoda has joined forces with firefighters in the western U.S. – a toy Baby Yoda, that is. A little boy from Oregon sent the doll to crews battling wildfires – and the gift was a hit.

Five-year-old Carver and his grandmother, Sasha Tinning, were shopping for supplies to bring to a donation drive for firefighters when they spotted “The Child,” a character in “The Mandalorian.”

“I turn around and this Baby Yoda is just looking right at me and he was a darn cute little fella,” Tinning told The Associated Press. “I said, ‘Hey, this looks neat, maybe we should take this to the firefighters.'”

Carver agreed, and he wrote a note to go along with the toy. “Here is a friend for you in case you get lonely,” he wrote.

Carver and his grandmother were shopping for supplies to bring to a firefighter donation drive in Oregon when they spotted the Baby Yoda doll.

Tyler Eubanks, who organized the donation drive, made sure Baby Yoda and the note made it to fire crews.

Now, Baby Yoda travels around with groups of firefighters, who take photos of him for Eubanks. She keeps track of the toy’s journey and posts the photos on a Facebook page she created, which is gaining popularity.

The note Carver wrote remains with the toy, pinned in a plastic baggie to his back, and he’s become a minor celebrity among fire crews.

“I really didn’t know that this was going to literally take off like a wildfire,” Eubanks said. “They’re having fun and it’s taking stress out of a very dark situation.”

Baby Yoda recently took a ride in a helicopter with TJ Ramos, an air tactical group supervisor with the Oregon Department of Forestry. Ramos said when he landed at helibase with Baby Yoda, crews were excited he had arrived.

“You could instantly see everyone perk up a little bit, some smiles came on some straight faces and it was a different day,” Ramos said. “There was a lot of, ‘Oh, my kid was telling me about Baby Yoda, can I get a selfie with him?’ I think it not only added some morale and just a lift to everyone, I think it added almost a connection to home life.”

Fire crews from California, Washington and Canada have even heard of the traveling Baby Yoda and have requested he join them.

Staff Sgt. Jaebyn Drake, a firefighter with the Oregon Air National Guard, said Baby Yoda has been a morale boost among firefighters. “It made them think about home and think about the loved ones that they left behind back home while they were out working long days and working this grueling, not-so-much-fun task,” Drake said.

The toy may be a small gift from a little boy, but with Baby Yoda, the force is strong.

“I’m hoping that we can keep it going,” Drake said. “He’s the 21st century Smokey the Bear.”

Lucas Galloway, from left, Jaebyn Drake, Rhett Schieder and Audrey Wilcox pose for a selfie with Baby Yoda on Sept. 20, 2020, while fighting the Holiday Farm Fire in Blue River, Oregon.