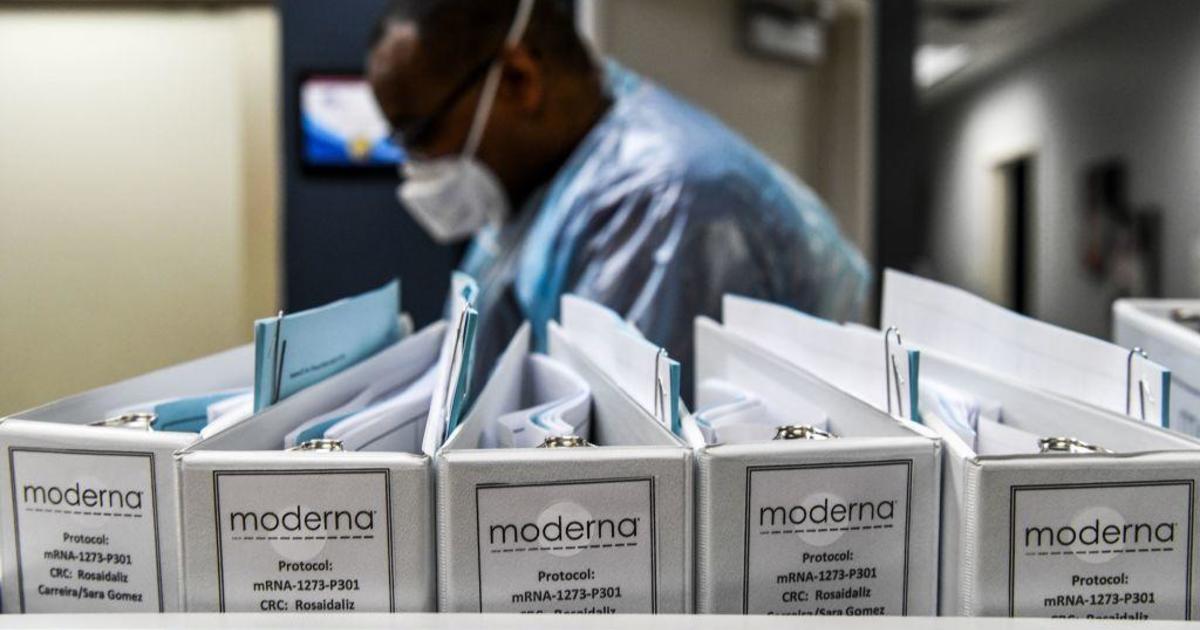 The Boston-based Moderna Therapeutics released a blueprint Thursday morning outlining how it will determine if its coronavirus vaccine, which is currently under development, is effective and safe. CBS News spoke to Moderna’s president, Dr. Stephen Hoge, for the “CBS Evening News” series Racing to a Cure.

Here are our top takeaways from that conversation:

1. Moderna is working on a first-of-its-kind vaccine

The vaccine being developed by Moderna is an mRNA vaccine, which works differently than a typical vaccine. Instead of preventing infection, the vaccine works to teach the body to better fight the virus, lessening its severity.

“The goal of this vaccine — of all vaccines in this case — is to stop the pandemic we all want to get back to a normal life as best we can,” Hoge said. “Now the primary efficacy measures we’re looking at are prevention of severe COVID-19 disease. If we can reduce this to a common cold then I think most of us will feel like we can get back most of our lives.”

2. When will Moderna know if the vaccine works?

While the company does have some initial data, Hoge said “it is very hard to know for sure.”

“We have announced today that we’ve made good progress in enrolling the phase three trial. So, we’ve actually enrolled over 25,000 of 30,000 participants in that study. But now we are going to depend upon those people, unfortunately, getting sick,” he said.

“Our best estimate — the earliest it could happen would be the early part or the later part of the fall — November, December time horizon. But it could happen but later or much sooner depending on the rate of transmission in the country,” Hoge said.

3. Early data suggests the vaccine could protect elderly patients as well as younger

The elderly have been hit particularly hard by the coronavirus pandemic, with Americans 65 and older making up nearly 80% of COVID-19 deaths in the U.S., according to CDC data. Hoge said there are early indications that the Moderna vaccine protects older patients at a level equal to that of younger patients.

“What’s really exciting news that we announced today is that we shared some data we previously presented to the CDC on elderly Americans who’ve been in our vaccine studies in phase one and showed that we’d had the same level of protection in the elderly as we’d seen in the younger populations,” he said. “That gives us hope and reason for optimism that actually our vaccine will be able to protect those highest-risk populations, particularly those over the age of 65 who are bearing the brunt of COVID-19.”

This week, President Trump has publicly disagreed with the head of the CDC, saying Redfield was “confused” when he testified a vaccine might not be widely available until mid-2021. Hoge said he hasn’t felt pressure from the government to expedite the vaccine trial, but that he feels the gravity of the moment.

“We haven’t been feeling direct political pressure but definitely feel the social pressure of this moment,” Hoge said. “The goal of developing a vaccine is not to get a vaccine approved — it’s to stop the pandemic. That will only happen in hundreds of millions of people, hundreds of millions of Americans agree to vaccinate. That will only happen if they have confidence in the data and the vaccine. And so what we did today in publishing our fully unredacted protocol but also what we did in our presentations.”

5. Why Hoge worries about a lack of trust in science

“I think the thing that concerns me most as just a citizen as somebody, as a scientist and a citizen of this country right now is there’s so much lack of trust from so many directions – and not all of it, you know, misplaced.”

“Science functions through transparency; it functions through putting the data out, and so we’re trying to do our part to push that out there,” Hoge said. “That process of peer review and open discussion of transparency is essential for good scientific decision making. It’s somewhat of a challenge to do that in the public square.”

“How do we continue the debate and make sure we’re making the right scientific choices and we’re presenting honestly the uncertainties around those choices, while at the same time building confidence in the vaccine? I think that’s one of the biggest challenges we have. One of the things that keeps me up at night — not for today, but for next year as we try and stop the pandemic.”