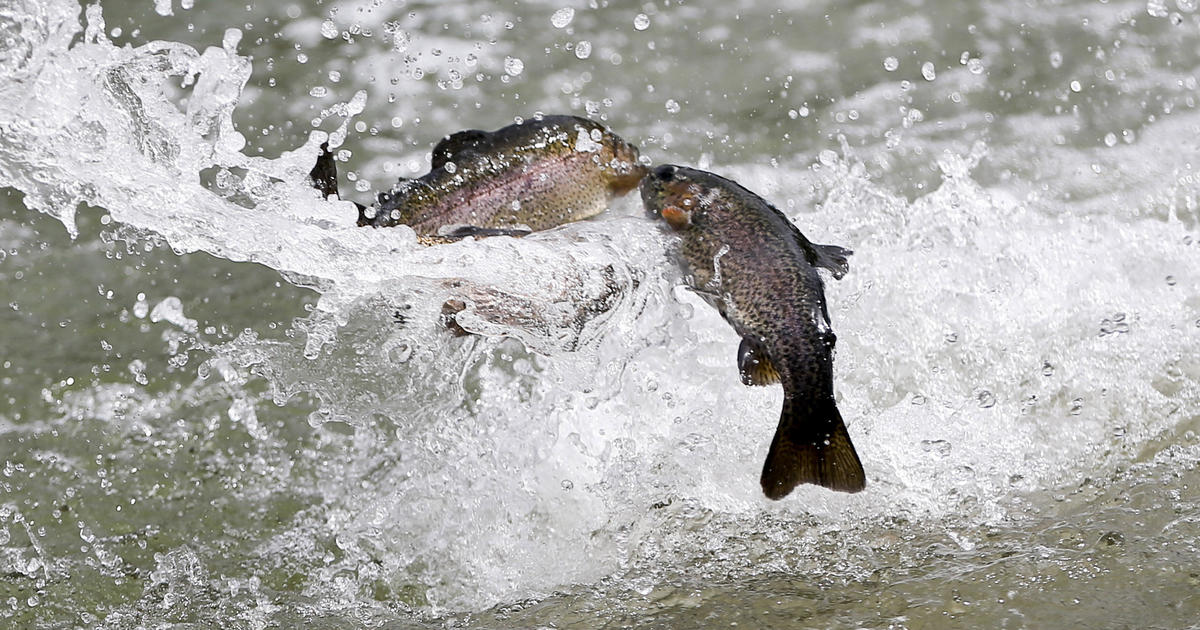 350,000 trout to be euthanized in California amid bacterial outbreak

Nearly 350,000 rainbow trout must be euthanized as California wildlife officials battle bacteria outbreaks at two fish hatcheries in the eastern Sierra. The naturally occurring bacteria, Lactococcus petuari, was first detected in April at Black Rock and Fish Springs hatcheries in Inyo County, the state Department of Fish and Wildlife said in a statement Monday. The facilities provide fish for stocking waterways in California’s inland deserts, the department said.

A pair of rainbow trout fly through the air as they flow with the other fish from a hose to the waters of North Park Lake as they are stocked on Monday, March 21, 2016, for the upcoming Pennsylvania trout fishing season at the Allegheny County park in McCandless, Pennsylvania, north of Pittsburgh.

The fish will be euthanized and Fish and Wildlife is contracting with an external vendor to provide catchable rainbow trout for planting in waterways later this summer, the statement said. Meanwhile other state hatcheries will help the eastern Sierra facilities make up the difference by placing fish in certain waters, officials said.

“This loss is a huge disappointment, but we were prepared for this possibility and are doing all we can to ensure to continued angling opportunity for the public,” Fish and Wildlife Fisheries Supervisor Russell Black said in the statement.

The department said the bacteria is naturally occurring and is most commonly spread by the movement of fish and eggs. Scientists believe the fish may have contracted the bacteria after birds brought it to the hatcheries.

Symptoms of the infection in fish include “bulging eyes, lethargic or erratic swimming and increased mortality,” the department said. Some fish infected with the bacteria may be asymptomatic. The department said it is “rare and unlikely” that a human would contract the bacteria from fish, but cautioned fishermen to cook the fish they catch to at least 145 degrees Fahrenheit and to not feed their dogs any trout or salmon caught in the area.

Read More: 350,000 trout to be euthanized in California amid bacterial outbreak

« Trevor Noah on taking over "The Daily Show"