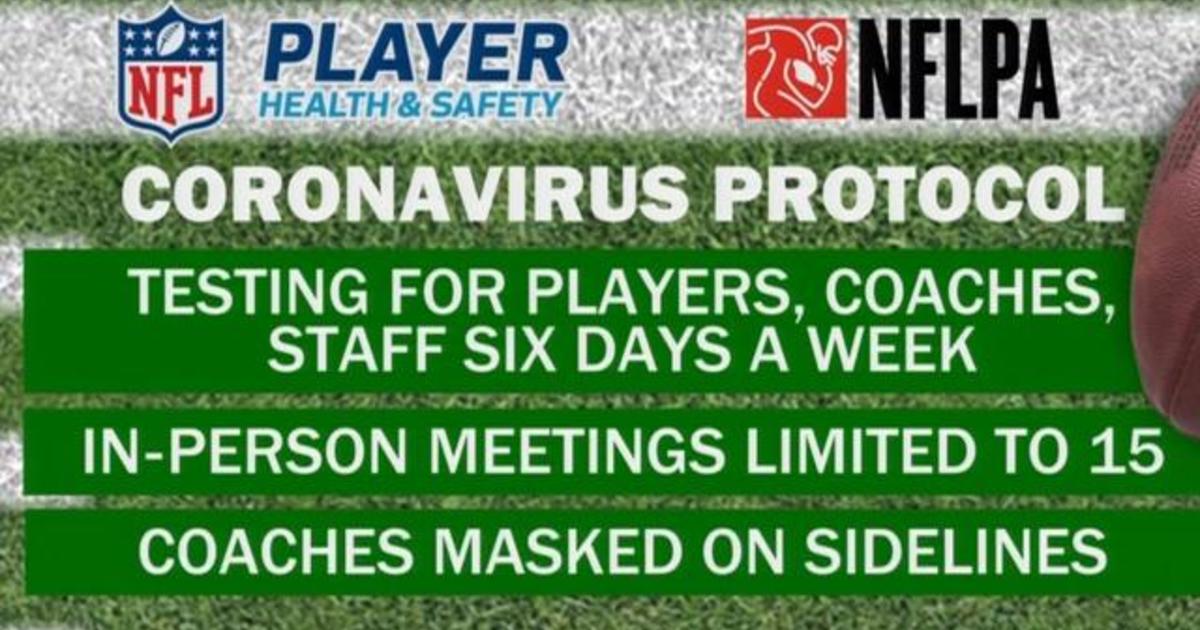 2020 NFL season to kick off with COVID-19 safety protocols

The NFL returns Thursday night with the Super Bowl champions Kansas City Chiefs taking on the Houston Texans. But, the coronavirus pandemic and the growing demands for racial justice and police reform have forced the league to make major changes, on and off the field.

The NFL chose not to go into a bubble like the NBA and NHL and will look more like the MLB season instead. Games will be played in stadiums across the country, but there will be a host of new safety protocols for teams that will change the look and sound of the game.

“Hopefully we can get through the season now. You know, getting here was the first step,” said Calais Campbell, a 12-year NFL veteran and vice president of the NFL Player’s Association, which worked with the league on establishing this season’s COVID-19 safety protocols.

Those include testing for players, coaches and some staff six days a week. In-person team meetings are limited to 15 people. And coaches will be masked on the sidelines during games.

Since August 12, just five NFL players have tested positive for the virus at training camp.

Campbell, a defensive end on the Baltimore Ravens, told “CBS This Morning Saturday” co-host Dana Jacobson that so far he has felt “very safe” on the field.

“But now you start playing these other teams, and you don’t talk to guys, you don’t really know what they’re doing,” he said. “Hopefully they value themselves and the game of football as much as I do. And we can go out there and compete, healthy.”

Part of staying healthy in most NFL stadiums also means no mascots, no cheerleaders and no fans. Something Campbell admits will be an adjustment.

“It’s just an energy that you, you know, you can’t recreate,” he said. “I kinda feel like I’m playing high school football again, you know? Where you had, like, 300 fans in the stands.”

The coronavirus isn’t the only thing impacting the NFL season. A national movement for racial justice and police reform was sparked by the deaths of George Floyd and Breonna Taylor. Athletes across sports have used their platforms to help lead the fight and amplify the message.

“There’s a significant difference between hearing and listening,” said Jeff Fisher, who was an NFL head coach for 22 seasons. “I think the league, for a long time, was hearing. ‘Yeah, we got it. We’ll get a handle on this.'”

Fisher coached the St. Louis Rams during the unrest in Ferguson following the 2014 police killing of Michael Brown. And some of his players faced backlash for protesting Brown’s death.

“I had six players who made the choice to come out for introductions with their hands up in the air. … It was probably one of the most emotional, most meaningful experiences that I had ever gone through,” he said. “I just encourage every single coach out there, at any level, … to be proactive and to listen and to be understanding.”

After Floyd’s death, NFL players demanded the league listen, releasing a video in which they said, “This is what we, the players, would like to hear you state: ‘We, the National Football League, condemn racism and the systematic oppression of black people.'”

They demanded an admission that the NFL was wrong to “silence” players who were peacefully protesting — players like Colin Kaepernick. League Commissioner Roger Goodell answered their call.

Hearing that from Goodell was “huge,” Campbell said.

“That’s a big deal,” he said. “Team owners are really trying to understand the players, and understand what we go through, and they’re trying to help us. Obviously, we have a long way to go, but it’s a great start.”

The NFL and the Players Association worked together on new social justice initiatives, including working on turning NFL stadiums into polling places on Election Day. They’ll also sponsor educational programs leading up to the election to help people register to vote and apply for absentee ballots.

« Bargain-hunter favorite Century 21 to close its doors for good